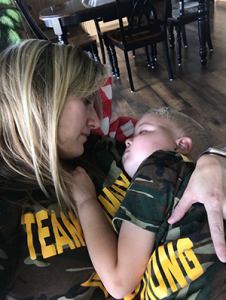 That’s what parents hope to receive from their children who have left them too soon.

It’s an indication that their child is okay. That they are still with them.

And, most important, that they will see them again.

Amanda Ruddy gets those winks from her son, Tommy, who passed away after a short, 11-week battle with Diffuse Intrinsic Pontine Glioma (DIPG). She says they give her a small sense of peace that he is okay.

But Amanda, who lost her son two years ago today, is weary.

Bereaved parents say the second year after the loss of a child is much more difficult than the first.

Reality sets in, in the worst way.

“You see the whole world moving on, yet yours is frozen,” said Amanda. “You see his friends growing, yet he is not. He’s forever ingrained as that 5-year-old little boy in my mind.”

For Amanda, relationships have also changed. People understandably struggle to engage, and acquaintances don’t know what to say in the face of such loss.

Amanda admits she struggles with it, too.

“Some of it is my own level of discomfort in not wanting to let others see my pain,” said Amanda.

Sometimes the easiest thing to do is withdraw.

The Ruddy family moved to Michigan from Philadelphia, where Tommy shared his dad’s passion for the Eagles.

Tommy could often be found in his Nick Foles jersey, watching games with his dad, Tom, who made sure to get all of the Eagles games on TV after moving to Michigan.

So when the Eagles made a playoff run last year, it was emotional for Tom, who had to go through the experience without Tommy by his side.

When they made the Super Bowl, Tom made the last-minute decision to drive to Minneapolis and purchase a ticket to the game. Upon receiving that ticket, Tom received a little wink.

The Eagles went on to win their first Super Bowl in franchise history, with Nick Foles at the helm.

After the game, Amanda posted a photo of Tommy in his Foles jersey, arms raised in the air.

The Philadelphia Eagles aren’t the only eagles associated with Tommy. On his urn are an eagle and Isaiah 40:31:

but those who hope in the Lord
will renew their strength.
They will soar on wings like eagles;
they will run and not grow weary,
they will walk and not be faint.

So it was a “wink” when a bald eagle started following Tom Ruddy on his outdoor runs the spring after Tommy passed away.

“Tom was never a runner, but when Tommy was sick, he purchased a treadmill through a grant we received to do something for ourselves,” said Amanda.

“He would run on it at night when Tommy was sleeping and it became very therapeutic for him.”

After Tommy passed away, Tom took to the streets. Rain, sleet, snow, or hail, he ran almost every single day.

“It was euphoric to him, knowing that eagle was up there,” said Amanda. 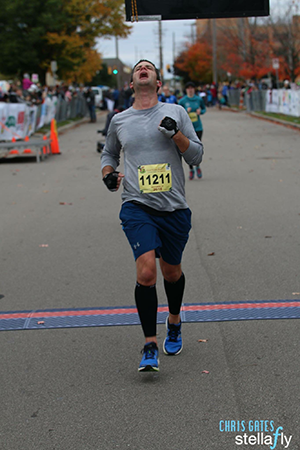 After running consistently for 10 months, Tom took his outlet to the next level, running in the 1st Annual RunTough for Team Tommy event. From there, he did a 9K. Then he did more. As he competed in race after race, winks from Tommy appeared.

“Almost all of bibs he’s received for his races have an 11 in them,” said Amanda.

When Tom and Amanda participated in the Grand Rapids Mud Run in August, Tom’s bib was 3311. For the Allendale Triathlon in September, it was 164 … 11 when added together.

Most recently at the Grand Rapids Marathon, his bib was 11211.

These little winks don’t bring reprieve for Tom and Amanda. They aren’t a fix for their pain. But they do offer a little bit of peace that Tommy is okay.

“We do believe that Tommy is healed and in heaven,” said Amanda, “so when he makes himself known to us, it makes us smile.”

Channeling his pain into running for two grueling years without Tommy has inspired Tom to run in these races. Now he is taking things one step further.

He signed up for the 2019 Chicago Marathon as a way to honor Tommy while raising money for pediatric brain tumor research through Team ChadTough.

“Tom went to Chicago for the marathon in 2017 and watched several people run in Tommy’s honor,” said Amanda. “He was restless on the sideline and knew he had to get out there himself.”

He is hoping to reach his $2,000 fundraising goal for the marathon during this eight-day stretch that begins with Tommy’s angel-versary and ends with what would have been his eighth birthday.

“It’s not an easy time for our family,” said Amanda, “Having a goal gives us something to focus our attention on that is positive while honoring Tommy.”

Donations can be made via Tom’s fundraising page on Crowdrise … along with guesses of what bib number Tommy is going to come up with next. 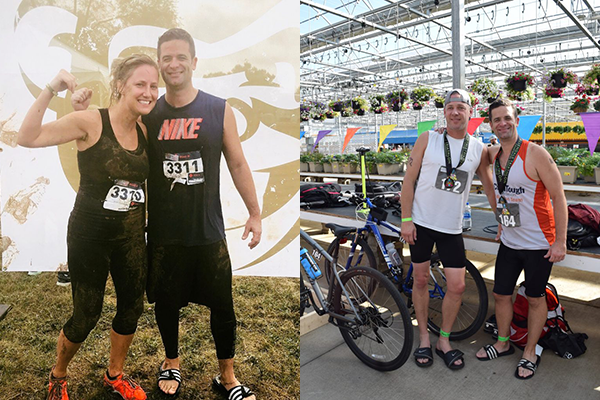