Dale Buist admits he had never heard of The ChadTough Foundation when one of his long-time employees at Countryside Greenhouse approached him about the 100-acre farm Allendale hosting the second annual RunTough For Team Tommy.

But considering who was asking, Buist knew he couldn’t say no.

Kurt Kruizenga‘s four children attend the same school that Tommy Ruddy did before he passed away from Diffuse Intrinsic Pontine Glioma (DIPG) in the fall of 2016, just 11 weeks after he was diagnosed. 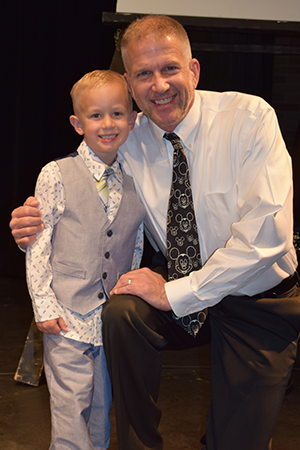 His daughter, Emerson, was entering transitional kindergarten the summer Tommy was diagnosed and would be learning in the same Jenison Early Childhood Center classroom where Tommy had established a bond with his teacher, Ron Harig.

Through Harig – the teacher Tom and Amanda Ruddy had written an emotional thank you note to after their son finished transitional kindergarten – the connection between Kruizenga and Tommy’s story was immediate.

“As a parent,” Kruizenga said, “it just kind of touches you.”

So for Kruizenga, helping host this year’s event on a farm he had devoted 20 years of his work life to only made sense given the fact that the massive property includes a built-in 5K race course.

For Buist, a long-time runner who said running is built into the family farm’s lifeblood, holding an event for a cause that was foreign to him before the Sept. 29 event just made sense.

Why it made sense, he wasn’t sure. Buist receives a handful of requests for charitable donations every single day, which, he said, is just part of running a small business.

“But every now and then, you find something it feels you were directed and guided to,” Buist said. “And this is one of those events.

“I always like to make sure people understand that I do follow the Lord and there are times you feel His push on your heart and this one of those times.” 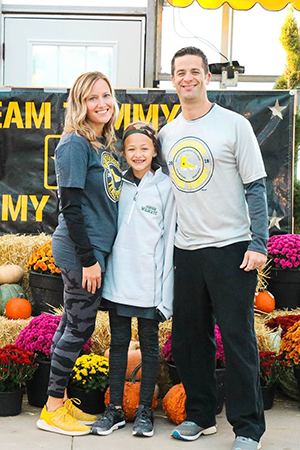 This year’s RunTough for Team Tommy event, along with the accompanying Virtual RunTough race drew 355 runners, a 30 percent increase in participation from the inaugural event in 2017. Together with RunTough for ChadTough, which was held the same day in Saline, more than $250,000 was raised for DIPG research.

For the Ruddys, who had no connection with West Michigan before moving to Grand Rapids four years ago, seeing so many runners connect with their story was almost unbelievable.

“As the parent who loses a child, your biggest fear is that he or she will be forgotten,” Amanda Ruddy said. “This is one day that we can definitely know Tommy is not forgotten.”

As runners finished the course, Amanda Ruddy found herself connecting with strangers, some of whom had reached out to the Ruddy family in the days and weeks after Tommy was diagnosed with DIPG. At the time Amanda was dealing with her son’s illness, responding to the flood of letters and emails wasn’t possible. But suddenly, as she began to put names with faces, she felt a closeness with runners – some whom traveled more than two hours to participate – who used the day to pay tribute to Tommy and other children affected by this disease.

“I feel like runners feel that this is something they can do to kind put their head in that place and really try to think about how it might feel – even for that brief time – to be in our shoes,” Amanda Ruddy said. “Maybe they’re not a runner but they’re experiencing that tough two miles or whatever it might be.

The race course included a yellow finish line and course markers on a day when runners wore yellow T-Shirts, paying homage to Tommy’s favorite color. Kruizenga, who ran cross country for Buist at Allendale High School as a teenager, participated in the fun run with his children and, like many of the day’s runners, felt a renewed connection to the young boy the event remembers.

“You could totally feel the vibe,” he said.

The feeling carried over to Buist, a long-time runner who has finished marathons and who was one of the 5K participants at last month’s event in Allendale. Despite not being as well connected to Tommy’s story as Kruizenga and others in attendance, emotion overtook the 61-year-old farm owner once he crossed the finish line.

Buist, who had only seen pictures of Tommy, fell to the ground after finishing the run and remained there with his arms spread wide and his eyes fixed on the sky. Amanda Ruddy, who was at the finish line, quickly went to see if Buist was OK.

With tears streaming down his face, Buist replied, “I’m more than OK. I’m just taking in this moment.” 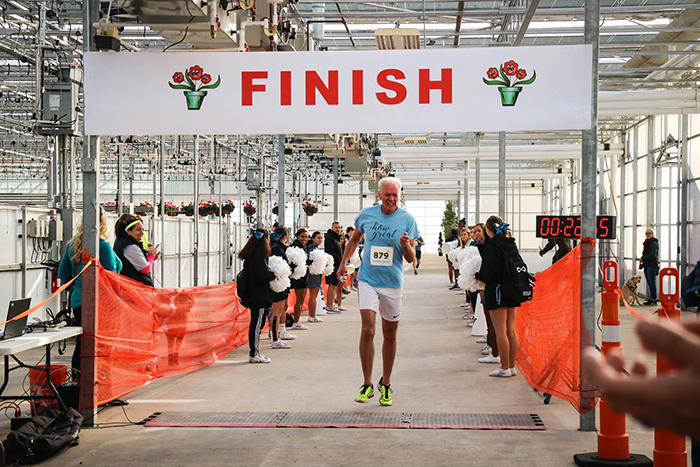 Countryside Greenhouse already has plans to host the RunTough for Team Tommy again in 2019 when Buist hopes to make the event even bigger than this year’s run. Countryside already hosts a sprint triathlon which attracts elite performers from around the Grand Rapids area.

But after seeing the connection runners have with Team Tommy firsthand this year, Buist is convinced that there is a reason why his family farm has established a connection with the annual event.

“This is personal. It’s real personal when you see people like Tommy’s parents and his sister. It’s personal for compassion for little boys and girls – it’s something that’s going to tug on anybody,” Buist said. “But when you look at a mother that has went through what she’s went through, yeah, it’s emotional and it feels good to participate.

“God could cure this whole (disease) with a thought, but He tells us we have to be His hands and feet and that’s our job. If you put the two together, it’s a win-win for everybody.”

Register for this year’s RunTough for Team Tommy event on Sept. 29, 2019