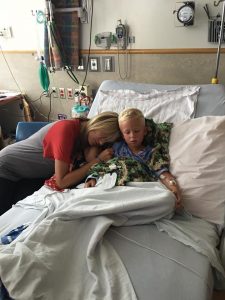 One year to the day after Amanda and Tom Ruddy‘s son, Tommy, was diagnosed with diffuse intrinsic pontine glioma (DIPG) and 11 weeks before it would take his life.

“I’m not sure which day was worse,” Amanda wrote. “Diagnosis or death. There was barely time to breathe between the two dates regardless.”

Since August 12, Amanda has been recalling her family’s painful DIPG journey to the nearly-10,000-strong group of supporters on her Facebook page. Her words are poetic, revealing the stark contrast between “normal” and “nightmare.”

When Tommy was diagnosed, he was staying with his grandparents in Pennsylvania. Amanda was at a business conference in Chicago while Tom was at their family home in Michigan.

After the news reached Amanda, a former ER nurse, she rushed to be by Tommy’s side.

“The sight of Tommy’s face when he saw me was the most beautiful thing I’ve ever seen,” she wrote recalled. “He nearly jumped off the ambulance stretcher and was so excited to show me the needle in his arm he didn’t even cry for. His poor little body was about to endure so much and my medical mind was racing 1,000 miles a minute envisioning it all.

“I never left his side again for the fight of his life and I am so thankful I was able to be there with him through every single second of it.” 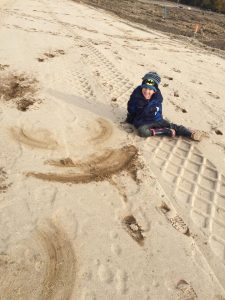 Tommy’s fight was not an easy one. Many children with DIPG respond well to radiation treatment, giving them months of “normal” before the disease takes over.

That wasn’t the case for Tommy, who had a tough time from the beginning.

“This is a grueling picture of Tommy after he came out of his biopsy,” Amanda posted on August 22. “He woke up different already and never ever came back to baseline.

“My heart was literally tearing into shreds, but I had to hide every ounce of pain in his presence.”

Amanda and Tom were dealing with the current reality of all DIPG parents: choosing their child’s treatment plan while up against the worst possible outcome.

“We had to smile and laugh and act silly and be ‘normal’ when there was absolutely nothing normal about what was happening to our baby,” said Amanda on September 19. “Imagine looking into your child’s eyes and knowing there is absolutely no cure for what they are facing. Nothing at all you as a parent can do to save them.

“You basically are forced to watch as they slowly lose their abilities one by one right in front of your eyes until eventually you are helping them die.”

The Reality of DIPG 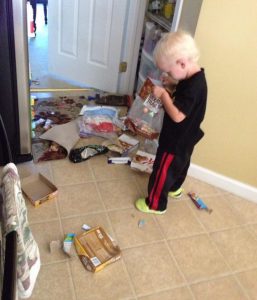 Amanda has taken her family’s Facebook supporters through her journey in a raw, heart-wrenching way. She’s remembered the incredible child Tommy was while talking about the losses her family continues to face.

“Tommy loved chocolate,” she wrote. “It was definitely his most favorite food in all its forms. He would do anything to find it … even climb and raid the pantry. I think of him every time I see the jar of Nutella in our pantry and it makes me smile to think he’s experiencing so much more fulfillment than chocolate in heaven.

“As much as it hurts every second of the day that he isn’t here, I know he’s finally safe, but it certainly doesn’t make this any easier by far. Never take a day for granted. Love and hug your kids today and everyday.”

Back-to-school time — something that brings joy for so many families — is especially difficult for parents who have lost a child. Amanda posted a photo of 9-year-old Isabella on her first day of fourth grade.

“A fourth grader who’s filled with the normal back to school jitters, but also with a bundle of emotions about facing this new year without Tommy.”

The Ups and Downs 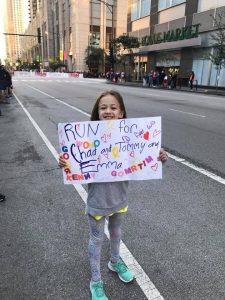 With each #tommytuesday post Amanda shares comes heartbreak along with the incredible gift of sharing who Tommy was. One of the most revealing posts about his character shows Tommy in his wheelchair at the hospital.

“We were about to finish radiation and we had to visit the gift shop just like we always did,” said Amanda. “Not to buy toys for himself, but for others. Tommy had a heart of gold, even before his illness.

“So giving and so loving and so genuine. Even in the midst of his ultimate battle, he kept others first. He simply exuded kindness.”

Amanda also highlighted the giving and support of others. During the first weekend in October, a group of 38 runners participated in The Chicago Marathon to benefit The ChadTough Foundation.

Many ran for Tommy, Chad Carr, and Emma Buron, who lost her battle with DIPG on Mother’s Day. Emma’s dad, Ken ran 26.2 through an injury to honor his baby girl.

“This team of marathon runners is so inspiring,” wrote Amanda. “Over $100,000 raised so far and so much awareness spread through this journey. Proud of each and every one of you for dedicating your time and efforts to this cause. What an emotional weekend.”

August 12 marked the beginning of Tommy’s fight with DIPG and today marks the end. Tommy gained his angel wings on November 3, 2016, just 11 weeks after diagnosis.

“We clung to every last second of our time with you, but we prayed for your suffering to end,” Amanda wrote. “Something I never ever imagined as a mother that I would be begging God for help with. That you would be taken from my arms into freedom of disease and pain.”

That freedom for Tommy began an emotional tug-of-war for Amanda and Tom. Fighting the battle of appreciating what they have here on earth while having a piece of their hearts in eternity.

It is something they struggle with daily and are no doubt wrestling with as they face today and November 11, which would have been his seventh birthday.

“Time is a very strange thing now,” wrote Amanda. “It passes by yet it seems to stand still. I want it to fly by so I can see you again yet I want to see Isabella enjoy her childhood and slow her speed of age down. Time is hard … so very hard.

“The future scares me and the past haunts me so I truly can only live one minute at a time and know we will see you again soon.”