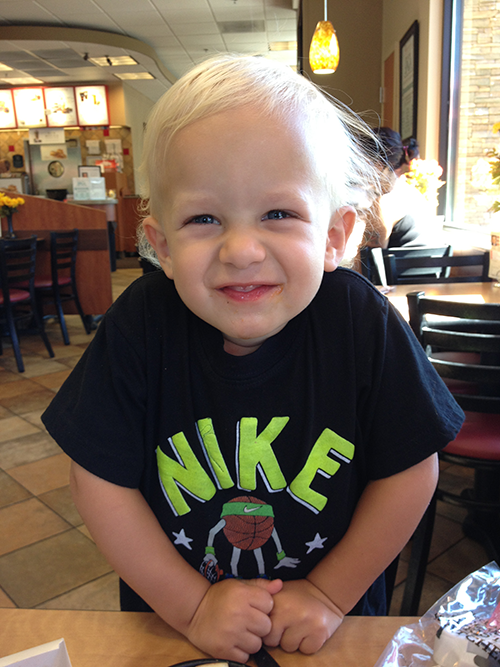 Adventurous, loving, and kindhearted, Tommy Ruddy, was an amazing 5-year old boy. He loved being outdoors and doing anything sports related. It wasn’t unusual to see him riding his dirt bike outside using no hands or standing on the seat for more of a thrill. Fear was something that rarely surfaced in his emotions, even throughout his illness.

A distinct kindness accompanied his opposition of fear. He had an amazing heart and found such joy in giving to others.

Being from Philadelphia, Tommy was an avid Eagles fan. His teacher hadn’t quite gotten him to cross over to being a Lions fan, but was successful with the Michigan college sports teams. Our family went to the Lions vs. Eagles game for Thanksgiving in 2015. Tommy was so excited to be a part of this.

With no surprise, the Lions destroyed the Eagles that day! Walking out in all our Eagles gear, a Lions fan yelled to Tommy “Fly back home little Eagle!” With no hesitation, Tommy proudly replied, “Hey, pick on somebody your own size!” He was passionate with all his heart, and he loved so deeply. It was evident in everything he did, even at just 5 years old.

Thomas Anthony Ruddy was born on November 11, 2010 to Tom, Amanda, and big sister, Isabella. From an early age, it was clear Tommy was the life of their family. He was outgoing, loved sports, and had an incredible, giving spirit.

“Tommy was so different from other kids his age,” said his mom, Amanda. “He was always concentrated on others even during his illness. When kids would come to visit him in the hospital, he would take them to his toy cabinet and no child left empty-handed. Every Tuesday for radiation, he would go to the gift shop and buy toys for his friends and his sister.

“And he was the first child in his class last year to shave his head in front of the school for two friends who had Alopecia (a condition in which the child loses all hair on the body).”

Tommy already had a lisp, but Amanda noticed it was more pronounced while he was reading a book. Later that night, the family was sitting down eating dinner and she saw him stare off to the right for a solid 10 seconds.

“I looked at my husband and I said, ‘Oh my God, Tom, I think he has a brain tumor,’” recalls Amanda. “He said, ‘Amanda, you’re crazy.’ He talked me down, like he always does, since — as an ER nurse — I always think the worst.”

More red flags popped up over the next three weeks. Tommy choked on a Teddy Graham. He suddenly wanted to take extended naps in the summer. He also started drooling.

Amanda wrote everything down, chalked it up to circumstance (lots of activity, molars coming in) and life went on.

It wasn’t until Tommy was visiting grandparents in Pennsylvania that everything came to a head. Tom had spoken to Tommy over the phone and immediately called Amanda after hanging up.

“I was at a medical conference in Chicago,” said Amanda, now a clinical research nurse. “On the morning of Thursday, August 12th, Tom called me really early. He said, ‘I don’t know, I just feel like you should call him. He doesn’t seem right, he’s not answering my questions, he just seems off to me.’

“So I FaceTimed him and almost immediately I could see a facial droop. I knew something was wrong at that point.”

Amanda’s mom took Tommy to the emergency room while she and her husband worked to get to Philadelphia to be with their son. Amanda traveled from Chicago while Tom traveled from the family home in Grand Rapids.

“I had to get a flight out of Chicago and my husband drove,” Amanda recalls. “So about 12 hours later, we were all together in Philadelphia.

“The initial CAT scan said he had a mass in his mid-brain. We proceeded with a biopsy because they weren’t exactly sure what this mass was. Even with MRI, they said it was atypical findings.

“Then the biopsy took about four, five days to come back. It was quite a long time. And they sat us down and told us he had DIPG.”

Most children receive initial radiation and have months before the disease comes back with a vengeance. Typically, the family has 9-12 months before having to say goodbye to their child. DIPG moved much faster with Tommy.

“We went to radiation daily here in Helen DeVos, came home, and went to our Make-A-Wish trip,” said Amanda. “So we went, and the week after we got home, he started to decline.”

Tommy needed a shunt placed, which didn’t go well. What should have been a 20-minute procedure ended up being five-and-a-half hours. He kept coding after the surgery, losing respiration and oxygen.

“His lungs never really recovered,” said Amanda. “We found out we could go home, which we did, because he was just getting completely depressed in the hospital and not himself.

“We had a discussion with our oncologist and we decided to bring him home on hospice, but we did it with the idea we were going to still fight. We weren’t giving up, we were coming home to make him stronger and let him tell us which way to go with this next.

“We were still waiting to get him into a trial – that was the only hope at this point – but five days later he passed away.”

Fighting for a Cure 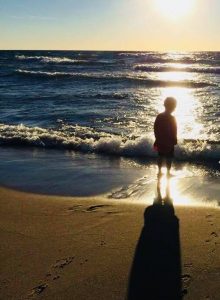 It has now been nearly three years since Tommy passed away, and his family misses him every single day.

“We clung to every last second of our time with you, but we prayed for your suffering to end,” said Amanda one year after Tommy’s passing. “Something I never ever imagined as a mother that I would be begging God for help with. That you would be taken from my arms into freedom of disease and pain.

“This picture also resonates so vividly to me now. A depiction of you stepping into the lights of heaven and leaving this world of darkness behind. I so badly wish your journey was different; that DIPG never entered our lives and you were still here about to be celebrating your 7th birthday.

“I am forever grateful to have been chosen as your mommy, but forever heartbroken that it was so abbreviated in duration. Loving and missing you every second of every day my sweet Tommy.”

To give to DIPG research in Tommy’s name, visit chadtough.org/donate.